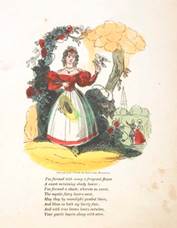 I've formed with many a fragrant flower,
A sweet entwining shady bower,
I've formed a shade wherein so sweet
The mystic fairy lovers meet,
May they by moonlight gambol there,
And bless us both my lovely fair,
And with true lovers' knots entwine
Your gentle heart along with mine.

Lloyd’s first 25 years in business were marked by hectic productivity. Little is known of what he produced in his teenage years, but his focus would have sharpened in 1834 when he had a new family to support.

He turned to periodicals in earnest from that year. Most contained fiction, and some covered practical topics like housekeeping and gardening too. He was well aware of the potential interest among women readers.

His methods were open-minded and flexible. He would try a new title or topic and continue with it as long as there was a demand. If none, it was dropped. Serialised fiction ran for as long as the public showed an interest in the story. Some ceased after half a dozen episodes while others ran and ran: 92 for Sweeney Todd and 109 for Varney the Vampire.

Lloyd claimed to have started selling printed works as soon as he left school at 14 in 1829. These were cards, songs, cartoons — anything that the newsagents could sell for him. For some unknown period, he was working in a solicitor’s office and also attending classes at the London Mechanics Institute. Inspired by these studies, he wrote a shorthand primer in 1834, price 6d, filling in all the hieroglyphs by hand.

Lloyd’s earliest literary products were called ‘chapbooks’, a single printed sheet of paper folded into booklet form. It was a term of contempt for the material sold by itinerant chapmen (hawkers) since the dawn of printing. They were cheap and many were crude and low quality, but they offered an alternative medium while publishing was still controlled by state and private monopoly.

He turned to periodicals and secured a regular following among the literate poor. His first may have been the Weekly Penny Comic Magazine; or, Repertory of Wit and Humour, launched in 1832 but short-lived.

From 1836 he started issuing multiple titles, most containing serialised fiction and ‘news’. To avoid the stamp duty that was levied on newspapers, the news was either old or made up (see a possible example). When these echoed current events, readers would have gleaned enough information to understand the message.

The pool of ‘penny-a-liners’—freelance writers who turned their hand to more or less anything—were probably his first authors. The payment method tended to lead to a lot of repetitative staccato dialogue and Lloyd designed ruled paper to prevent outright manipulation. A similar pool of freelance illustrators supplied the woodcuts that accompanied the writing.

Lloyd’s radical political views are an accepted fact, confirmed from 1842 by the early Lloyd’s Weekly. However, little evidence of his own views survives.

Two of his addresses (Wych Street and Holywell Street) were associated with the Chartists. He published cartoons by Charles Jameson Grant in the mid-1830s, including a series called Lloyd’s Political Jokes. Grant, who was as prolific in cartoons as Lloyd was in publishing, also contributed to Lloyd’s Weekly Penny Comic Magazine. It is believed that some of the illustrations in Ela the Outcast were by Grant too.

Although 44 Wych Street was notorious for pornography, he never plied that trade. Some of the writing, such as descriptions of young women, was rather florid and titles like The Lady Godiva; or, Peeping Tom of Coventry were suggestive, but the content was not explicit. To do so would have defeated his object of publishing material that was as suitable for wife and children as for the man of the house.

Lloyd’s publishing ideas were often derived from what others were doing but, whatever scorn he may have earned along the way, his furious industry, popular material and penny price soon made his publications ubiquitous.

Although highly profitable at times, his business remained unstable until the early 1850s. He first came close to bankruptcy in 1839. His focus on periodicals improved things and he made enough money from them to set up a newspaper in 1842.

Lloyd had to grapple with this external uncertainty after investing heavily in Lloyd’s Weekly, with its greatly increased costs and an inflexible publishing schedule. Even when it began to prosper, he said that he often didn't know where he would find the money to pay his staff at the end of the week (per Catling).

After 1848, when he again had to compromise with his creditors, he applied himself to putting his finances in order. He did so, with conspicuous success.